Welcome to the De La Rue genealogy page! This is the central point of reference for the genealogy of the De La Rue families of Australia. (Alternative spellings: Delarue or de la Rue.) If you are a member of any of the families listed below, this page is for you! 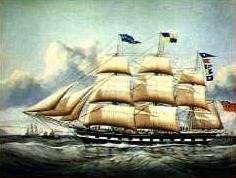 My main interest is to document the descendants of Thomas and Tabitha (née Edwards) De La Rue, of Leicestershire and Surrey, England, who arrived at Point Henry, Port Phillip District, NSW (now part of Geelong, Victoria), Australia on 28 Jun 1849. They arrived with eight children as assisted migrants on the Caroline Agnes (570t, Master J. Alexander), after departing London, 24 Feb 1849, and settled at Germantown (now Grovedale, a suburb of Geelong), Vic. Two more children were born in Australia after they arrived. Thomas was my great-great-grandfather, and was born in Linghton, Leicestershire on 5 Dec 1808. The children born in England were christened in Camberwell and Walworth in Surrey, so it seems that the family were living there for a few years before they left.  I have records of over 2,000 descendants (including spouses) of Thomas and Tabitha.

Other De La Rue families of interest include:

A number of members of the families are also engaged in this research. I am also researching my own ‘pedigree’ as much as possible – other family names of interest include Kelly, Westwood and Lamb. There is convict ancestry here – the De La Rue family is linked to the Thorowgood family, and the Kelly family is linked to First Fleet convicts Nathaniel Lucas and Olivia Gascoigne.

Thomas & Tabitha had 11 children. Their dates of birth were as follows. The first nine of these were born in Surrey, England; the last two were born in Geelong, Australia.

I do not seem to have any photos of Thomas, but this is a tin-type that we believe is of Tabitha Edwards: 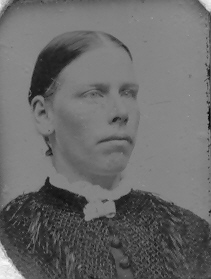 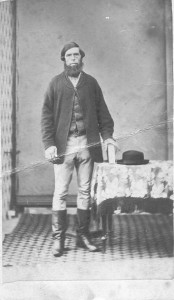 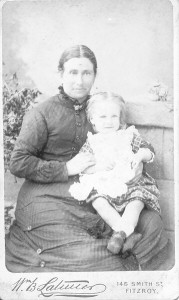 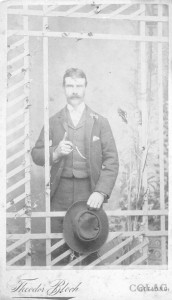 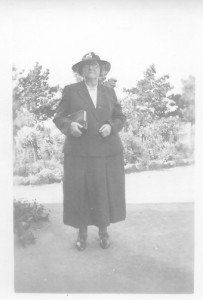 The name is French in origin (meaning “of the street” or “of the road”). In the original French it is spelled “de la Rue”; today it is also often spelled as one word in English-speaking countries. Other alternative spellings found include “De La Rew”, “De La Roux” and “De La Reu”. Some of these variations may be due to varying levels of literacy. Then there is the question of the relationship to “La Rue” and “Rue”. (In some countries, prefixes like “de la” are sometimes ignored.)

The name appears in France, and has also been on the Channel Islands (particularly Guernsey) for some time.  There are suggestions that the name may have either noble or Huguenot associations, and that it arrived in England from France as early as the late 11th century. An alternative version of a De La Rue family tree included in Lorna Houseman’s book The House that Thomas Built states that the first recorded appearance of the name in Guernsey was a land grant from a Danish king in the 12th century.

Richard de la Rue (who has commented below) reported recently that the De La Rue Company presented a family tree at an exhibition a few decades ago which included research into the origins of the name in Guernsey.  This research reported that there are two distinct families on Guernsey, the latest of which came to the island as Huguenot exiles in the 16th century from the Limoges area of France. He reports that the earliest known record of the name in Guernsey dates back to a document of 1179.  Richard also wrote:

“A few years ago [2001], La Société Guernesiaise assisted University College London (UCL) and the BBC in a project called ‘The Blood of the Vikings’ in which they traced the reach of the Vikings according to the DNA in each long lived family in Guernsey. (It made pretty dull TV.) The Viking gene shows up as a particular type of the male chromosome and they tested this against one representative of each old Guernsey family. I had the privilege of being the representative for the De La Rues and was told that I had a gene commonly found in Norway; thus I think this points to me belonging to the older De La Rue family dating back to 1179 rather than the lot that came from southern-central France. All very tenuous I know, but when people ask me how long I have lived in Guernsey, I like the romance of replying that I’ve been here for 800 years!”

As I can only trace my De La Rue forebears back to Leicestershire, I still cannot connect my family back to any of these origins – nor to any of the other families mentioned here!

I have seen two distinct Coats of Arms for the De La Rue name.  One of these (which is listed formally in Burke’s Peerage) belongs to one branch of the family of Thomas de la Rue, the printer. His grandson Thomas Andros De La Rue was created a Baronet on 17 Jun 1898, and thus the coat of arms strictly only belongs to his descendants.  Andrew George Ilay De La Rue of London is the current (fourth) Baronet.  Read more on Wikipedia. (If you are not a member of this family, then any heraldry organisation that would like to convince you that you are entitled to it probably only wants your money!)

The formal description of this Coat of Arms is: “Or three bars gu., each charged with as many estoiles of the first, in chief an increscent and a decrescent of the second. Crest – A brazier gu. fired between two branches of laurel, issuant from the flames thereof, a serpent nowed and erect ppr”. The motto with this is: “Cherche la verité” (“Seek the truth”).

The other coat of arms I have only seen rough sketches of, and have no clarity on the origin (or accuracy) of this at all. This one includes forts or castles. 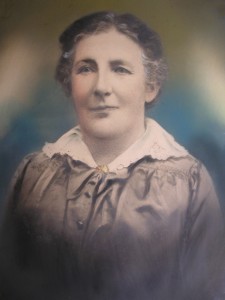 My mother’s mother was Alice Dale Lamb, born on 16 Jul 1887.  Her parents were Peter Lamb and Jane Burton, and they arrived in Australia in Nov 1884 on the Loch Ness (one of the Loch Line ships – made infamous by the sinking of the Loch Ard).  Peter was 25, Jane 26, and their eldest daughter Lizzie had her first birthday on the ship on the way out.  The Lamb family in Australia stayed in touch with their relatives in Scotland down the generations since, and I have maintained some contact with them myself, visiting Peter’s family home in Greenlaw, Berwickshire, in 1983, which is still owned and occupied by the Lamb family.  Of all my pedigree, this is the only family that we still have some contact with in their country of origin.

Joseph Thorowgood was born in Cardington, England in around 1800.  He was charged on four counts of sheep stealing on 24 Oct 1828, and transported for life, leaving on the “Bussorah Merchant” on 6 Oct 1829, arriving Hobart, Tasmania 18 Jan 1830.  He left his wife and four children in England; Mary Ann was expecting the fifth (Elizabeth).  They were later allowed to join him, arriving on 10 Jan 1833.  Joseph was my great-great-great-grandfather – his daughter Edith married Robert Betts, and their daughter Sarah married James De La Rue, my great-grandfather.

There are many variations on the spelling of his surname – it was spelt “Thorogood” on ship’s records, but also appears as “Thoroughgood”, “Thurgood”, “Thurrowgood” and others.

His family was documented in the book “The Thurrowgood Story” by the late John F Hill, which had a limited publishing run of 400 numbered copies, in around 1985.  Some copies of this book are still available from the Colac & District Family History Group Inc., at PO Box 219, Colac, Vic 3250.

Information on the above families is available on request in two files:

A public copy of my family’s GEDCOM file has also been uploaded at Ancestry.com; although I have since acquired more information. You can view the database here – but you may need to register with them first (free).

Please contact me for more details. I am happy to load any information on the families here.

My genealogy software of choice is FZip Family Tree.

Shortcut to this page: http://delarue.net/gen/